Let us start to think about multiplicative thinking

An interview with Karl (Year Six) – Why do we think Karl is at risk? 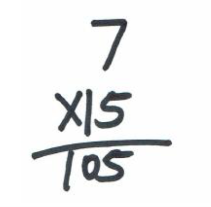 INT: Do you normally write them down like that?

KARL: I normally write them down but sometimes it pops up in my head.

INT: Can you show me how you would do it if you wrote it down? [Karl wrote down the vertical algorithm, but did not show the carried tens].

INT: Can you show me what seven lots of 15 equals 105 looks like with the bundling sticks?

KARL: [after a pause] I don’t know. I’ve never worked with sticks before.

INT: OK, there’s 15 [bundle of 10 and five singles] What would you need to do to show me that there? [indicated the written algorithm].

KEC: Can I work in my own way? [He did show seven ten bundles and grouped them to make 70 and then seven groups of five which he grouped together as 35. However, he did not regroup them to make ten tens and five singles].

WHAT DOES THIS TELL US?

To read more about Karl and why we think he is ‘at risk’, follow this link more from Karl

Read on for even more from Karl

MAWA acknowledges the Traditional Owners of the land where we work and live. We pay our respects to Elders past, present and emerging.

We celebrate the stories, culture and traditions of Aboriginal and Torres Strait Islander Elders of all communities who also work and live on this land.